What's On the Hook?

Life has been busy here in the Monkey House. I've been busy getting orders out (thank you all!), dealing with family stuff, breaking up fights between the kids, and trying to set up the new home for Mama's Little Monkeys.

I've also been busy crocheting! Yarn, it's my new addiction! So here's what's on the hook this week:

Infinity scarf for my niece. (excuse the horrid photos...it was nighttime, so my natural sunlight was sleeping on the job..) 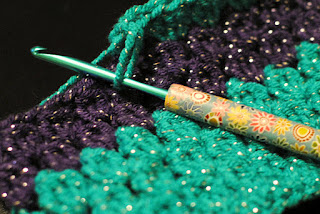 Scalloped leg warmers for a friend who's starting Roller Derby. She may be in season TWO before I finish them, but here's the start!! :) 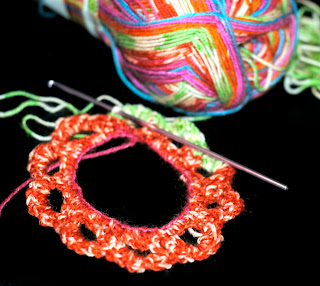 So that's what I'm hooking this week, I'm sure I'll chain up something else too :)

Now time to hit the hay and zzzzzzzzzzzzz as my monkeys are wearing me out this week!~~
Amy
Posted by Amy at 10:24 PM 3 comments:

Despite my little one being sick and being a few days behind my normal schedule, I did manage to get a little bit done this week.

I finished up a baby blanket that's been in progress for months. I reshot some product images and have worked on some more items. I'm currently working on a Moosey hat for Eli, his 4th birthday is Monday (I can NOT believe it..)

What's new with you? 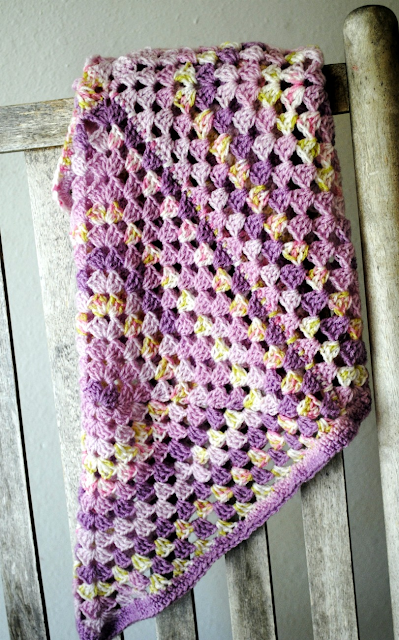 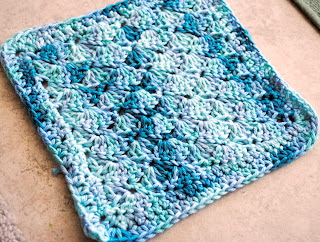 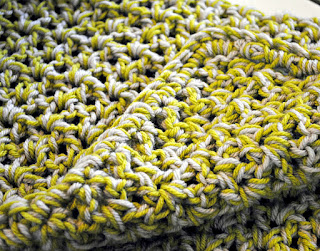 Heart Wash Cloth for my CAL over on Ravelry! 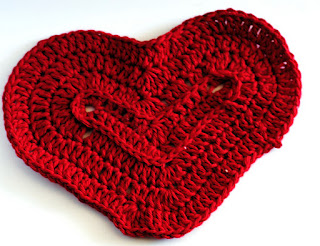 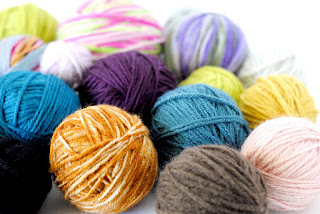 Year Without Wal-Mart Check In

Well, so far so good. I've done several shopping trip this month and not had to set foot in WM once. If you've no idea what I'm talking about, read my previous post here.

I've not even noticed a difference so far. I've used the local grocery stores, Amazon, and Sam's Club (yes, I am keeping Sam's because I already paid for the membership, I'm not throwing money away. There are also some business expense items I get there.)

I seem to have still spent the normal amount, no more then usual, for my groceries. Sure I've noticed some things are more costly at local grocery stores, but even if I pay 1.50 for taco seasoning versus .50.....it's still a savings when I don't buy 20.00 worth of nonsense stuff I can't resist!
I shall keep you posted, but so far, so good!
~~Amy
Posted by Amy at 6:13 PM 2 comments:

Okay, so I hate cooking. But I love to bake. I figure if I must slave in the kitchen, sugar should be involved, right?

Well one thing I miss terribly since going Gluten Free over 6 years ago, is King Cake. Our family doesn't even celebrate Mardi Gras but I LOVED king cake.
So, I wanted to attempt a GF version.

Now, if you eat GF you know, what you make GF is never EXACTLY like the original. I've accepted that and a new level of dessert contentment helps me accept that!

(Please excuse my photos, it was an overcast day and the lighting in the kitchen is awful)

This is ONLY GLUTEN FREE. If you have other allergies, you'll have to make your substitutions.

Now there are other icing recipes that involve only powdered sugar and lemon juice, but I had no juice, so I found this one. Worked for me.

DIRECTIONS:
Make cinnamon chebe (which is delicious by the way), as directed on box. I doubled the recipe to make two separate king cakes. If you want a larger king cake you could double the recipe and roll the dough, intertwining it like you would a bread.

But I digress, make the chebe bread as directed to the nearly last step about rolling it and cutting. This is where you decide how you want to design your king cake. You can make 'mini' king cakes by continuing in their directions and basically making a cinnamon roll with king cake toppings. I rolled mine flat as directed then cut it in half. Then I rolled each piece into a 'log' and connected it to make a circle (traditional king cake shape).

The dough was a little skinny, but that was fine with me.

(by the way, it is NOT pretty by any stretch of the imagination) 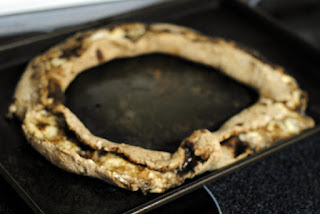 IF you want the cream cheese filling, make the filling then insert it in the dough BEFORE YOU ROLL IT.  To make the filing just beat the filling ingredients until smooth.


Once out of the oven, I prefer to let it cool a bit. I left the blue/green cake cool, I did not let the red/yellow cake, and you can see the difference when you pour on the icing. 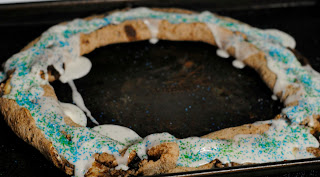 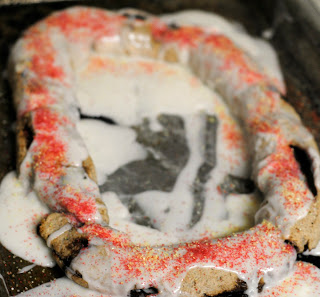 To make the icing:
Beat the butter until softened. Add powdered sugar and vanilla and continue to beat, gradually adding milk until a glaze consistency is achieved.

Okay, I'll be honest, I totally didn't do it this way because I didn't read the directions first....I just put the butter, vanilla and milk in one bowl and added it straight to the powdered sugar. When I started beating it, it didn't glaze up well so I just put a bit of milk in it until it reached glaze consistency. Still worked out okay.


Pour icing on top of king cakes and then add colored granulated sugar on top.

VERDICT: No, it's NOT the same as Randazzo's or Rouses's king cake, but until they make a GF version, it's better than others I've tried. I DO NOT KNOW how it will turn out if you change anything for allergy reasons. I'm hoping the cream cheese one is better after it sets up a bit because the cream cheese still tasted warm when I tried it, and I'd rather it be cooler. I'll be sure to try it again tonight just to check :) 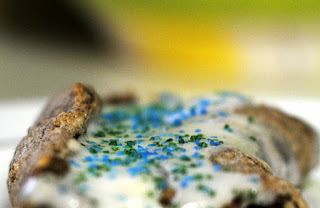 I thought I'd try another crochet pattern :) 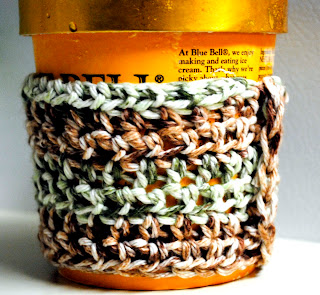 I know there are some ice cream pint cozies floating around, but I thought I'd do a simple one.

NOTES:
I chained 30 but 32 might be good too, I liked it to be a little more snug.
Terms:
Ch=chain
hdc=half double crochet
st=stitch
ss=slipstitch 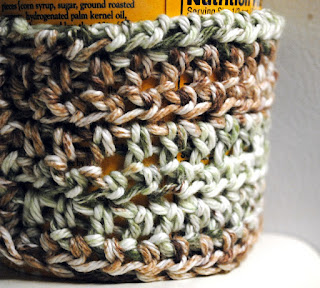 Yarn: I Love This Cotton (or any cotton)
Hook: H hook

ROW TWO: HDC in each st across until the end of the row. Ch 2. Turn.

To Join Edges SS seam closed. Fasten off and weave in edges. (I liked the seam showing, but if you don't you can turn it inside out.)

That's it! Now enjoy your ice cream without your fingers freezing! :) I'm going to go eat my prop in a bit.

So perhaps you've seen the 40 Bags in 40 Days challenge floating around blogs and Pinterest for awhile? Well, perhaps I shall try it.... 
This is for my house, my needs, so we shall see what happens!! It may take me an entire year but I am forever purging, this will help keep me focused I hope!! :)
~~Amy
Posted by Amy at 9:56 AM 1 comment:

Big Bang Theory...Where Have I Been?

Yes, I'm slow, I realize that....I was AWARE "Big Bang Theory" was on television, I'd just never gotten around to watching it. I happened upon it the other night, and I LOVE IT!! Sheldon...oh my word...is it just me, does Sheldon have Asperger's?? I love him!!

I'm slowly catching up  via the reruns on TBS and Blockbuster!! :) Yeah for good TV!!

The lovely Lea from LA Jewelry Designs!!!! Lea, random.org picked you! :) Drop me a line with your addy and I will ship the blanket out next week!! :)

Thanks all who entered, look for more giveaways as I go through inventory!!