my little man, Eli was born!  In contradiction to his big brother's birth...Eli's birth was quiet, calm, and actually quite pleasant. Life has never been the same since!! Going from 1 to 2 children is quite a change. As usual, his first months were a blur to me, but I remember he spent a LOT of time wrapped in a moby type wrap on my front! I lost track of how much food I dropped on his head...

Although Eli has Autism, I'd never change him. He's loving, usually quite happy, and how can you not love a kid who thinks farts and burps are hilarious??

It's been a wild ride, Eli, but I love you more today than yesterday, and the love and fun keeps on growing!! 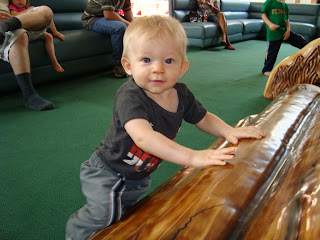 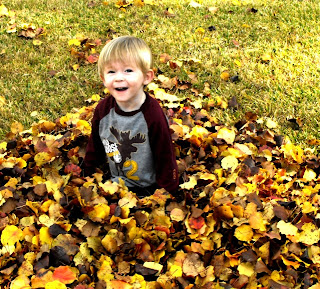 Ok, so I'm slowly getting the hang of it. Today was  my first real venture into the world of CVS and Extra Bucks!! I'm no guru like many others, but I'm working it!

So I created my coupon binder this week! Much easier! I was even able to just hand a lady in the store a coupon that I didn't really need, so hopefully that saved her a buck :)
Today I hit up Walmart, Winn-Dixie, CVS, Walgreens and Target...all with the 5 yr old in tow. He did really well and I thought it was important to bring him to show him WHY Mommy does what she does...that if we plan and work at it, we can save enough money to do fun things!!

Walmart is hard to save a ton of money in, and overall MOST of their prices on groceries are pretty good.  I should note NOWHERE local doubles coupons..NO ONE. Target will "stack" manuf. coupons with Target ones but NO grocery store doubles. Bites, big time.
Anyhoo, so here is this week's Walmart finds...not pictured is another bag of chips ....DH stole those before I could take the pic. Between coupons and price matching, I saved 10-11 bucks...not major but helps! Grand total: $40.65 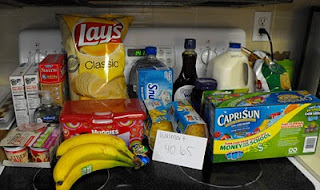 Winn-Dixie: I should note, I'm not a fan of most of the local grocery stores. Their "sale prices" are really not that great a deal when you look at how much cheaper they are at Walmart or even in bulk in Sam's or Amazon. But, their Buy 1 Get 1 (B1G1) deals are usually a pretty good savings. Not fab but not horrible. This round cost me $21.04---but I SAVED $23.16...more than I spent! So the non perishables go into my stock pile and the salads are to enjoy this week. I should mention...bagged salads are not NORMALLY a good deal. The CouponMom ran the numbers once and you basically are paying someone 5k a year to cut lettuce for you. Her theory is, if it takes you less than 5 minutes to do it yourself...DO IT. However, EVERY now and then, the bagged salads will be a better deal than the by the head lettuce. Today at Winn Dixie even the iceberg lettuce was 1.69 lb, so sometimes it's worth it for the convienence to me! 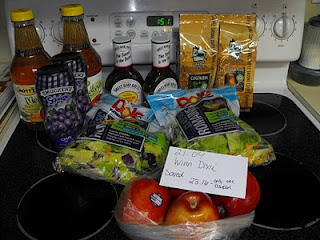 Next up, Walgreens. This one was funny because my son thought the Arizona teas were beer! Yes, little man...you stressed mama out so much she needs a Colt 45! They were out of the Crest Whitening Strips that were on sale, so I got a raincheck...but it's ok, I scored those later also at CVS.
Total at Walgreens: 2.68 saved 2.96. The teas were .50c ea with in store coupon, and the pantiliners were .99c with in store coupon PLUS I had a .75c off manuf coupon! ROCKED that one. 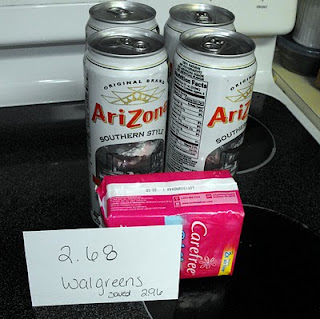 I didn't snag a picture of Target, it wasn't THAT impressive. 48 roll of Scott toilet paper, toy for the little human, movie for the little human (hey what's the point in saving if I don't splurge every NOW and then...his splurge cost me all of 13.00 bucks.) and 10 yogurts for 33.00! Not to shabby! Remember to sign up for the Target Red Card..you do NOT have to make it another credit card!! Mine is linked to a checking account and it gets you 5% off EVERY day!! If you're going to use a debit card anyway, not having a RedCard is like throwing money away!

Ahhhh, last but not least...CVS. Now...I'm a coupon virgin still compared to some and I haven't learned all the in's and out's of drugstore deals. I've not touched learning Rite-Aid yet...I wanted to master CVS and Walgreens first! So this is the first time I really paid attention and worked the CVS Extra Bucks program. The best way to work these deals is to break your purchases up! Also, the cashier told me, scan your CVS card every time you go in--REPEATEDLY! She said keep scanning it til it doesn't shoot any more coupons out!! She also said do it FIRST so you can help plan your shopping right when you walk in.
So today's CVS deal..I know many of ya'll can do WAY better, but this is great for me!
Grand total of $32.17 and that includes a 31.99 box of Crest White Strips (way in the back there if you can't see em!) 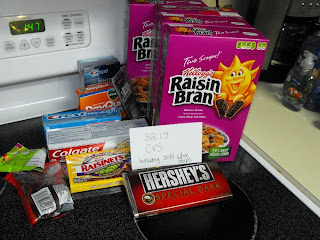 So basically I paid retail for the white strips then the cereal, candy, toothpastes, keychain and candy were free!! Now, I don't normally BUY Crest White Strips, but I figured I'd give it a try since it was such a good deal.

My point is...it CAN work. IT IS doable! You saw no meat purchases because I hit up Sam's and the recent sales already for that. My pantry and freezer is stocked! Just start slow and you can do it too!!

Oops, I did it again, another video tutorial. I'm being a goof in this one but hope you like :) Yes, I still wear scrunchies. I realize they're not cool, but alas, I don't care. I can't STAND hair in my face!!
Enjoy!

Email ThisBlogThis!Share to TwitterShare to FacebookShare to Pinterest
Labels: beginner sewing, craft how to, easy sewing, hair accessories, hair ponytail, how to, how to sew a scrunchie, impatient crafter, scrunchie, scrunchy, ten minutes, the impatient craftaholic

so some of my fave firsts in life...


Obviously these are in on particular order....just how they popped into my head :)
What are your fave firsts?

Year of Living Frugally--Purging and Cleaning

Hi all! While I don't really do New Years resolutions, I do like the changes a new year can bring, the clean slate, refreshing yourself and home.

I've continued my living frugally, cutting coupons, shopping the sales, stockpiling my pantry/freezer/fridge and I've made some nifty organizing/cleaning improvements :)

****Kitchen Organizing:
Print these freezer and pantry inventory forms from Organized Home. Instead of writing directly on the paper, I put the papers inside a clear plastic sheet protector, and write my inventory on them with a dry erase marker, and store the paper on a clipboard above my chest freezer. 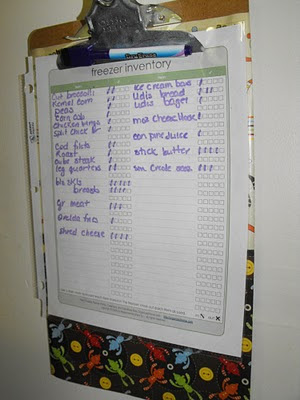 ****Kids Room Organizing:
My boys room has always been a disaster because they have bunk beds and until recently, my youngest was still in the crib. But he has successfully moved to a big boy bed so it was time to move that crib out. Doing so opened a huge part of their room and thus made a nice book corner for them :) 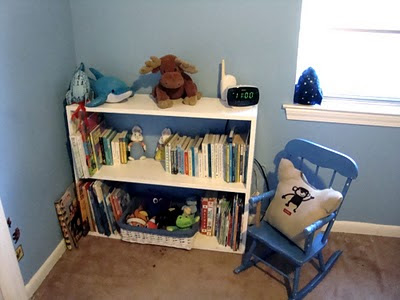 My boys also received a moon lamp from their grandma that shows the phases of the moon. Naturally it comes with a little remote that of COURSE is required to make the moon work. So, I decided to find a way to make sure they don't lose the remote. 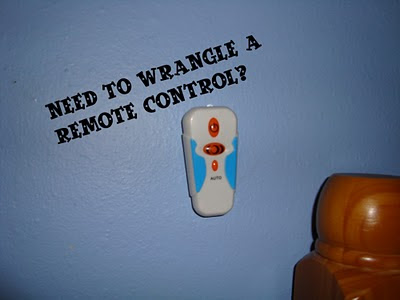 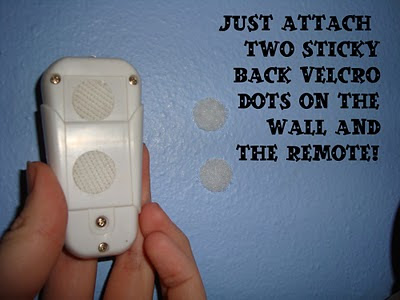 Now if only I could find a big enough piece of velcro to use on the boys when they get outta hand...just stick 'em to the wall!!

What's new in your cleaning/organizing/frugal world??

Perhaps you've heard of Project 365, the photography project where you take one pic every day for a year?

Well let's be realistic, there is NO way I could keep up with that. So I've decided to do my very own Project 52 Weeks. One pic, each week, of a random shot of my life. Practice my technique, lighting, color, etc.

The first week's pic is one without the greatest lighting but I liked the personal aspect of it.
What's on YOUR Nightstand? 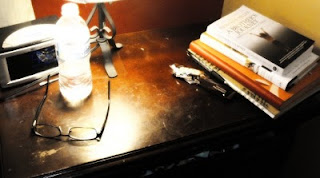