I have a friend, Merry. She is one of the sweetest, kindest, funnest women I know. A talented handmade artisan, mother, wife, former speech therapist, and overall fabulous southern lady, is just a few of the ways I can describe Merry. She truly fits her name.

Merry is currently winning the battle against breast cancer, but not without some sacrifices including a double mastectomy, chemo, debilitating illness along with the chemo, and losing her hair.

Actually, Merry is the kind of woman who isn't going to be bothered with waiting for her hair to fall out. Instead, Merry shaved it off and wore it proudly. Her hair's growing back, and her awesome spirit will never change, but I was hoping to do something for Merry.

I have been growing my hair out. It was colored, so I could not donate it. So today, I start fresh, anew, with a short new 'do. No color, no chemicals, just my little brown hair, growing....for Merry.

My goal is 8-10 inches. I will donate the actual hair to the Beautiful Lengths program. But in the meantime, I was hoping you'd help me do something extra special. I'm asking if you'll Sponsor my Hair! Whether you pledge a flat amount or a $ per inch, it all helps! Be it .25 an inch, .50 an inch or more, I'd appreciate it all.

I will donate the actual money to the cancer center of Merry's choice.

If you'd like to be involved and pledge a donation, please fill out the spreadsheet here. You do not have to send any money in now, unless you'd like to do a flat donation.

Thanks so much for your support! I will take pictures every 1-2 months of my growth to show how it's going! This is where we're starting: 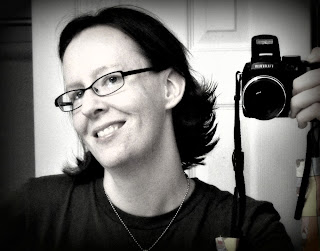 Well...Mother Nature did her thing, and all the baby birds have flown the nest!! One lone bird was a straggler, but he persevered and with a little coaxing from mom and dad, he joined his family in the air! It was an awesome experience for my boys to see the cycle of life and watch the birds grow. They keep asking where they are, and we look for them in our giant oak tree, (where we suspect they reside).

It was amazing how fast they hatched and grew, from the time mama bird built the nest to the birds flying away was less than 2 months. It really symbolizes how fast our own lives fly by. Here it is, nearly May. I am rocketing towards my 32nd birthday, my 'babies' are almost 6 and 3 1/2 years old! My best friend and I are talking about planning a cruise in less than 2 years to celebrate our 10 and 11 yr wedding anniversaries! Where does it really go?

I recall sitting around as a child whining about how slow time was passing. Being SO BORED that I couldn't stand it. Teen years spent agonizing when I'd "get out of this hell hole" and take over the world!! (Still working on the world domination part....)

Do we sit back in our senior years and look in the mirror, shocked to see the face worn with time? Do we still feel 20 but in an 80 year old body?? I still feel I think relatively the same as I did as a teen and college student.....does that mean I was mature then or am immature now?

It just shocks me every day how fast it goes! Enjoy it while you can, my friends!
~~amy/mama

So, I wanted to try my hand at gardening....right? I got a hanging strawberry plant, lime tree and an ivy. With the help of my more green thumb friend, we got them all growing. (QUITE a nice selection of limes growing also...bring ON the vodka and cranberry!!) I'm all proud of myself, not having killed anything yet, ya know...and then it started...

First, she was just hanging out on the ivy, which hangs by my back sliding glass door which overlooks the yard of toys. Then she's bringing stuff IN the ivy...sticks...straw...etc.

Now, I'm not an animal HATER by any stretch of the imagination...I grew up with pets and until the past two years, the man and I had cats (til mini-me became allergic). So, naturally, I was not a bird person as that would have been cruel to try to have wild birds around the cats, albeit, amusing.

So I had NO clue what to do with Mrs. Bird setting up shop in my ivy...not to mention I was not pleased that I could not water my ivy. Thankfully it's a hardy plant and thus far, survived.

Thanks to several facebook friends, I've learned a thing or two about birdies, and Mrs. Bird built herself a lovely little nest and took to creating some life. After much sitting and giving me evil bird looks if I walked out the back door....some little eggs appeared in the nest. (before you yell at me...no, I didn't take the plant down once the eggs appeared, I held the camera up to take pics.) 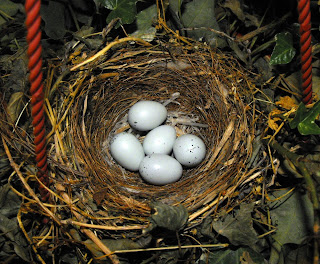 So Mrs. Bird sits on said eggs for quite some time...and lo and behold...weird things start appearing (I'm still curious where the eggshells end up?)
They all hatched pretty darn fast and looked pretty odd at first. SO tiny. Mind you this nest is probably less than 8 inches across in total. 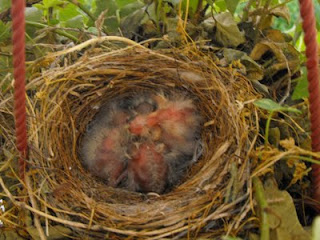 So Mrs. Bird continues to care for her babies, and I continue to NOT water my ivy (meanwhile, the strawberries and limes are rocking!) and we start to coexist. When she seems to realize I'm NOT going to take her precious babies and deep fry them, she stops trying to attack me when I go outside. She lets us play outside and she remains on the nest...watching us, but not as scared of us as before. I start to understand her call, and recognize her call out of all the birds flying around! It's pretty remarkable actually.....I'm being all Jane Goodall.... 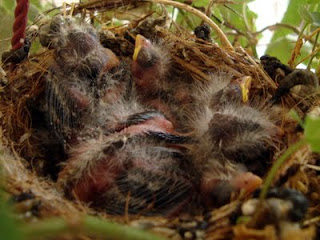 Naturally, the boys are LOVING this. Eli wants a peek every day...Harrison isn't as interested unless I bring it to his attention (the birds probably have a longer attention span than he does..) I admit....while I was once miffed she set up home in MY plant..I am willing to take one for the team and lose a plant for birdkind. And if she feeds her babies the slugs and caterpillars attempting to eat my lime leaves...then heck yeah she can stay put!

The babies are getting stronger. They poke their heads up now, look like real birds and one actually moved his wings a little bit today. Harrison wants to name them...suggested names included: Flappy, Fuzzy, Thor, Thomas and from Eli, "Birdie".
I personally will be naming this little guy, Elvis. 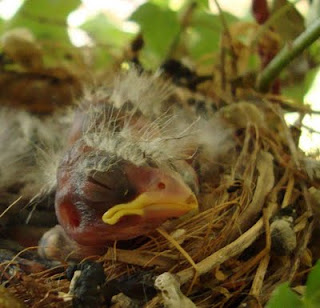 Of course I do have an incredible urge to hurl one of them at a pig...but that's probably because I play too much angry birds... 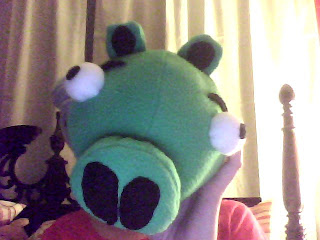 I promise not to throw any baby birds! I should point out, Mr. Bird has made quite a few appearances and he is the main 'worm bringer' of the couple. He is the one feeding them the most, and I found that quite chivalrous.
I suspect the baby birds will attempt to take flight in the next week or two, since one was already moving his wings a bit. I'm told they come back and lay eggs in the same spot, so I've not yet decided if we'll reopen Hotel Wren again, but in the meantime...we're enjoying our little natural sciences lesson!

I'll do my best to get some video and pics of them flying!!

Until our next birdie update...
~~mama

Did you notice anything different on my Badge Reels shop yesterday?? If you were observant you noticed my banner had changed!! :) It's a running joke that my shop Badge Reels, should be called Badger Eels because when people glance at it "badgereels" their mind reads it Badger Eels!! As a joke, I had a lovely friend of mine Kay, from the super talented Popincute create a hilarious banner for me based on that joke!

In case you missed it, here they are!

and my original banner, a beautiful piece of work from Studio Sien

I think Kay did a fabulous job capturing my original banners color and style while easing in the Badger Eels!!! How funny and adorable is it!?? Special thanks to Kay for her work and playing along with my joke! :)